As made clear from one of my previous posts (which you can read here), I am a glut for ridiculously challenging games. With the Steam Summer Sale occurring a couple of weeks ago, even though it’s currently the middle of winter here, I decided to cross one particular game off my “must play” list:

Gods Will Be Watching.

Time to start the pain.

Gods Will Be Watching is a point-and-click adventure game with a beautiful pixel based art style.

It is also a game where you will swear and curse countless, countless times.

Starting its life out as an entry for the Ludum Game Jam and taking out second place, Gods Will Be Watching was later developed into a full version off the back of a successful crowd funding campaign. The original game, which now features as a single level in the final version, saw the player try to survive with a team of 7 on a frozen planet.

Lack of food, fear of contracting a life-threatening virus, and the ever decreasing morale of the team leads to stressful decision making while at the same time, you are trying to fix a radio with the hope that someone will come to rescue you. 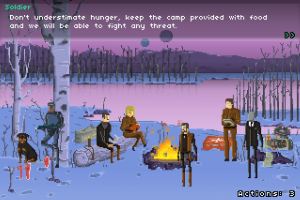 Gods is as tough as nails and focuses on carefully managing resources. Some levels are based on time, such as successfully hacking a database on a hijacked spacecraft before your enemy can apprehend you. This time element adds to the stress: should you focus your efforts on hacking, or shooting at the enemy to drive them back, even though shooting makes your hostages more likely to flee? If a hostage flees, should you kill them so the others don’t get the same idea, or let them go and retain your humanity? 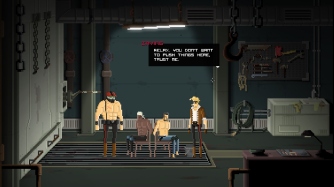 On the other hand, other levels allow you more time to critically think about your moves. This isn’t necessarily any easier, as you may know you are doomed and have to slowly watch as your poor judgement comes back to bite later down the track.

One of Gods’ strongest elements is that it constantly makes you question your morals. At times, I made the conscious decision to push through the main objective of the mission, not considering the mental stability of my team mates, leading to their inevitable suicide.  In other instances, I was required to decide if I would let my character take damage to avoid other team members being hurt. This is never an easy choice though: if the main character dies, it’s game over, if they die, you continue playing, but with one less person to help finish the mission.

Thought you did well, then realise you’re soft and still killed two people…

By yourself, you can justify your actions and not feel too badly about the decisions you have made; it was for the good of the mission right? Well, at the successful completion of each level, you can see how your decisions compared to that of others who have played. This is where you can see if you were in the majority with the decisions you made, or actually a sociopathic monster that went against the norm!

Gods Will Be Watching is a great game, but there are a few draw backs. Firstly, be prepared for replaying levels, a lot. This isn’t too bad if you muck up early game, but late game deaths can be infuriating, especially with the lack of checkpoints. Personally, I think these high stakes add to the weight of the game and the importance of each decision, but I can fully understand that this type of punishment is not for everyone.

Another downside is that character deaths do not carry over between levels. This may be because if a particular character dies, later levels would be impossibly challenging, however, it does make the deaths feel a little less important. Mind you, deaths of character within a level have a large impact on how you play and the other characters behave.

You know a game is effective when you sweat on every decision and have to look away when you know you’ve failed your character.

Lastly, this game does not pull punches, it’s rated 18+ for a reason. Whilst not as consistently violent compared to other games such as Hotline Miami, Gods displays a different kind of violence. There is a torture level was particularly difficult to play through: there’s nowhere to run, no way to protect yourself. This makes this violence quite difficult to watch as you subject your helpless character to various forms of abuse. This violent element does detract from the “enjoyment” of the game, but definitely adds to the “experience”, emphasising the morals at play in the game.

Overall, Gods Will Be Watching is a well crafted game that makes you look a little closer at how we behave as humans and makes us question the decisions we make. There are a few flaws and the $10 price may be a little high for the content provided, but if you see this game on sale, I definitely recommend giving it a go!

For a taster before you commit to buying the full version, you can play the original Ludum Game Jam entry here: